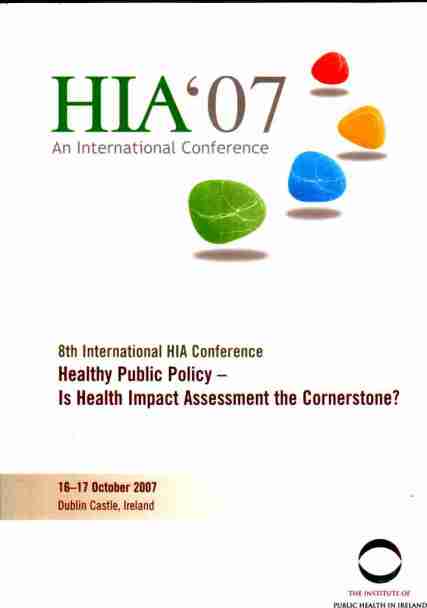 R. Fehr, D. Abrahams, G. Gulis, S. Medina, O. Mekel, L. Nilunger Mannheimer, A. Scott-Samuel, R. Welteke: Intersectorality and use of evidence in 6 EU-funded HIA projects. [07-01] Abstract: To investigate the scope and results of EU-funded international projects on HIA, we identified 6 such projects, completed by or before 2007: “Air Pollution and Health: European Information System” (APHEIS, 1999-2003); “European Policy HIA” (EPHIA, 2001-2004); “Promoting and Supporting Integrated Approaches for Health and Sustainable Development at the Local Level across Europe – Health Impact Assessment” (PHASE, 2003-2005); “Establishment of Environmental Health Information System Supporting Policy Making” (ENHIS): Work package HIA (2004-2007); “The effectiveness of HIA” (2004-2007); and “HIA in New Member States and Accession Countries” (HIA NMAC, 2005-2007). – In order to identify both commonalities and differences, the projects were analyzed with respect to: objectives; partner institutions and countries involved; work packages; methods employed; (preliminary) project results and products. Special attention was given to (i) intersectorality, i.e. which sectors (health, environment, development, etc.) were involved in each project, in what form, and with what type of result, (ii) use of evidence, i.e. which type of evidence was deemed relevant for HIA in each project; how should the evidence be established and how should it be made use of, according to each project. – These 6 projects, most of which were conducted with involvement of the World Health Organization (WHO), created a wealth of concepts and experiences on HIA, especially principles, procedures, methods, examples, policy briefings, tools, and evaluations of HIA initiation and implementation. They varied, e.g., with respect to focus on qualitative vs. quantitative methods; valuation of “risk assessment” type of approaches; priority given to participatory approaches; and efforts of dissemination. Hitherto, the projects were rarely viewed in a summary perspective. The paper includes a discussion of the opportunities and difficulties to harness and integrate the experiences from such a varied set of projects.

R. Fehr, O. Mekel, D. Abrahams, A. Scott-Samuel,  L. den Broeder, F. Haigh: Five concerted HIAs concerning the European Employment Strategy (EES) and its country-specific adaptations – The EPHIA project. [07-02] Abstract: The HIA literature does not contain many examples of “concerted” HIAs, based on an agreed methodology and covering identical or closely related topics. The European Policy Health Impact Assessment (EPHIA) project is a rare example, providing 5 such HIAs: one concerning the European Employment Strategy (EES) on EU level, and the other ones concerning country-specific adaptations. – The EU-funded EPHIA project was carried out by partners in the United Kingdom, Ireland, the Netherlands and Germany. The main objective was to develop and pilot a generic methodology for HIAs of EU policies. The project design consisted of reviewing existing approaches, drafting a generic methodology, piloting it with a selected EU policy, and refining it accordingly. Methods included comprehensive searches, content analysis, meetings, and interviews. – The paper focuses on 3 aspects: (i) mutual comparisons of the pilot HIAs which were based on a commonly agreed draft methodology, (ii) aspects of intersectorality represented in the pilot HIAs, and (iii) use of evidence in the HIAs. A synopsis of the pilot HIAs is presented, including methods employed, proposal analysis, health profiling, impact analysis, and conclusions. The paper presents and discusses selected commonalities and differences of the pilot HIAs in qualitative and quantitative view. As for intersectorality, the HIA reports are analyzed with respect to involvement of sectors such as employment, health, and environment. Concerning the use of evidence, approaches ranging from stakeholder involvement to mathematical modeling are taken into account. – Since this set of HIAs was conducted on (nearly) identical topics, based on a commonly agreed methodology, it provides an indication of variation in the handling of HIA methodology in practice. The paper addresses potential interpretations for the variation observed (e.g., positive flexibility) as well as conceivable consequences, including opportunities for harmonization of HIA approaches.