1845-1847: Life in the woods near Concord (MA), in a wooden cabin (built on the premises owned by his friend Ralph Waldo Emerson), near Walden Pond

Wooden sign #1: “I went to the woods because I wished to live deliberately, to front only the essential facts of life, and see if I could not learn what it had to teach, and not, when I came to die, discover that I had not lived.” Thoreau. Sheltered within a house he built on the 10 x 15 marked area, Henry David Thoreau lived at Walden from July 4, 1845 to September 6, 1847. 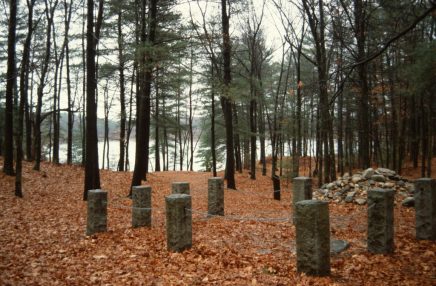 I see young men, my townsmen, whose misfortune it is to have inherited farms, houses, barns, cattle, and farming tools; for these are more easily acquired than got rid of. (p.5) … What a man thinks of himself, that it is which determines, or rather indicates, his fate. … The mass of men lead lives of quiet desperation. (p.7) … We are made to exaggerate the importance of what work we do; and yet how much is not done by us! (p.10) … necessary of life … The necessaries of life … may, accurately enough, be distributed under the several heads of Food, Shelter, Clothing, and Fuel … (p.11) … at any hour of the day or night, I have been anxious to improve the nick of time… to stand on the meeting of two eternities, the past and future … (p.15) Shall we always study to obtain more of … things, and not sometimes to be content with less? (pp.32-3) … students … should not play life, or study it merely, … but earnestly live it from beginning to end. (p.46) … We are in great haste to construct a magnetic telegraph from Maine to Texas; but Maine and Texas, it may be, have nothing important to communicate. (p.47) … the swiftest traveller is he that goes afoot. (p.48) … Thank God, I can sit and I can stand without the aid of a furniture warehouse. (p.59) … I am convinced, both by faith and experience, that to maintain one’s self on this earth is not a hardship but a pastime, if we will live simply and wisely… (p.63)

Where I lived, and what I lived for

… a man is rich in proportion to the number of things which he can afford to let alone. (p.74) … Old Cato, whose “De Re Rusticâ” is my “Cultivator” (p.76) … It is well to have some water in your neighbourhood. (p.78) (cf. 21 Jan 2017) … “There are none happy in the world but beings who enjoy a vast horizon” – said Damodara (p.79) … The morning, which is the most memorable season of the day, is the awakening hour. (p.80) … I went to the woods because I wished to live deliberately, to front only the essential facts of life, and see if I could not learn what it had to teach, and not, when I came to die, discover that I had not lived. I did not wish to live what was not life, living is so dear; nor did I wish to practise resignation, unless it was quite necessary. (p.82) … Our life is frittered away by detail. …. Simplicity, simplicity, simplicity! … Simplify, simplify. (p.82) … Why should we live with such hurry, and waste of life? We are determined to be starved before we are hungry. … As for work, we haven’t any of consequence. We have the Saint Vitus’ dance, and cannot possibly keep our heads still. (p.84) … I am sure that I never read any memorable news in the newspaper. If we read of one man robbed, or murdered … or one cow run over on the Western Railroad … – we never need read of another. If you are acquainted with the principle, what do you care for a myriad instances and applications? (p.85) … Time is but the stream I go a-fishing in. (p.88)

My residence was more favourable, not only to thought, but to serious reading, than a university … (p.90) … what are the classics but the noblest recorded thoughts of man? (p.91) … Books must be read as deliberately and reservedly as they were written. (p.92) … Books are the treasured wealth of the world and the fit inheritance of generations and nations. (p.93)

Will you be a reader, a student merely, or a seer? Read your fate, see what is before you, and walk out into futurity. (p.101) … I am refreshed and expanded when the freight train rattles past me … reminding me of foreign parts, of coral reefs, and Indian oceans, and tropical climes, and the extent of the globe. (p.108) … serenaded by a hooting owl. Near at hand you could fancy it the most melancholy sound in Nature … (p.113) … owls … represent the stark twilight and unsatisfied thoughts which all have. (p.114)

I believe that men are generally still a little afraid of the dark, though the witches are all hung, and Christianity and candles have been introduced. (p.118) … I find it wholesome to be alone the greater part of the time. (p.122) … I am no worshipper of Hygeia, who was the daughter of that old herb-doctor Aesculapius, and who is represented on monuments holding a serpent in one hand, and in the other a cup out of which the serpent sometimes drinks; but rather of Hebe, cup-bearer to Jupiter, who was the daughter of Juno and wild lettuce, and who had the power of restoring gods and men to the vigor of youth. (p.125)

Individuals, like nations, must have suitable broad and natural boundaries … between them. (p.128)

Ancient poetry and mythology suggest, at least, that husbandry was once a sacred art. (p.150) … By avarice and selfishness … the landscape is deformed, husbandry is degraded with us … Cato says that the profits of agriculture are particularly pious or just … (p.151)

Every day or two I strolled to the village to hear some of the gossip … (p.153) … One afternoon … I was seized and put into jail, because … I did not pay a tax to, or recognize the authority of, the state which buys and sells men, women, and children … (p.157)

… in September or October, Walden is a perfect forest mirror, set round with stones … Sky water …a mirror which no stone can crack … (p.173)

Enjoy the land, but own it not. Through want of enterprise … men are what they are, buying and selling, and spending their lives like serfs. (p.190)

I have no doubt that it is a part of the destiny of the human race … to leave off eating animals, as surely as the savage tribes have left off eating each other when they came in contact with the more civilized. (p.197) … I believe that water is the only drink for a wise man … (p.198)

Every man looks at his wood-pile with a kind of affection. (p.229)

The pond in winter

Ice is an interesting subject for contemplation (pp.269-70) … The pure Walden water is mingled with the sacred water of the Ganges. With favouring winds it is wafted past the site of the fabulous islands of Atlantis and the Hesperides … (p.271)

Introductory essay “Down the river with Henry Thoreau” by Edward Abbey [written in Oracle, AZ]

Thoreau’s mind has been haunting mine for most of my life. (p.ix) … Henry was not a hermit. … His celebrated cabin … was two miles from Concord common. A half-hour walk from pond to post-office. Henry lived in it for only two years and two months. (p.xiii) … Spirit both forms and informs the universe, thought the New England transcendentalists, of whom Thoreau was one; all Nature, they believed, is but symbolic of a grretaer spiritual reality within us. (p.xiv) … I do not approve of his fastidious puritanism. (p.xv) … When a publisher shipped back to Thoreau 706 unsellable copies of A week on the Concord & Merrimack Rivers … Henry noted in his Journal, “I now have a library 900 volumes, over 700 of which I wrote myself.” (p.xv) … The man seemingly composed wisecracks  and epigrams even in his sleep. Even on his deathbed. “Henry, have you made your peace with God?” asked a relative. “I am not aware that we have ever quarreled, Aunt,” said Henry. To another visitor, attempting to arouse in Henry a decent Christian concern with the next world, he said, “One world at a time, please.” (p.xxx) … at a time when the giants of New England literature were thought to be Emerson, Hawthorne, … Thoreau was but a minor writer. Not even a major minor writer. Today we see it differently. In the ultimate democracy of time, Henry has well outlived his contemporaries. Hawthorne and Emerson are still read, at least in university English departments, but as for the others, they are forgotten by everyone but specialists in American literature. Thoreau however becomes more significant with each passing decade. (p.xxx) … Henry had many words for every subject, and no last word for any. (p. xl)

“Transcendentalism emerged in the mid-1830s as an intoxicating set of philosophical, literary and spiritual tendencies unified by discontent with American life. Its core tenet, derived from Romantic philosophy, was that God permeated everything. As the movement’s best-known spokesperson, philosopher Ralph Waldo Emerson, put it, ‘behind nature, throughout nature, spirit is present’. Transcendent divinity could be perceived … was best found in nature. This set of beliefs fuelled the experiment in self-reliance and simple living on Walden Pond in Concord, Massachusetts, in the mid-1840s that led to Thoreau’s masterpiece, Walden … But something happened to Thoreau before his best-known book was finished, subtly changing its final form, making it more empirical, and thus scientific … In 1860, he encountered Charles Darwin’s On the Origin of Species, published the previous year … Throughout 1860, he carefully recorded the ways in which oaks and pines advanced, retreated and produced hundreds of thousands of acorns and pinecones to gain a foothold. He marvelled that Darwin’s theory ‘implies a greater vital force in nature, … equivalent to a sort of constant new creation’. This declaration marks an epoch in American intellectual life. In one short year, Darwin had propelled Thoreau to a new understanding: that nature just was — and that was enough.”